PBS FRONTLINE examines the legacy of one of America’s most admired & reviled school reformers.

You can watch this documentary on TV or online here.

Here’s an essay about the movie Won’t Back Down  from Nancy Schniedewind (Professor at SUNY New Paltz and co-editor with Mara Sapon-Shevin of Educational Courage: Resisting the Ambush of Public Education) and Julie Woestehoff  (contributor to Educational Courage):

Walden Media’s Won’t Back Down portrays the heroism of one parent and one teacher fighting harmful educational practices by taking over their school. Their victory is as mythic as it is misleading. Those who should be celebrated by such media attention are the real-life heroes at the grassroots who have been fighting for meaningful educational change day-to-day, year-to-year.

“GET OUT OF LOUISIANA WHILE YOU STILL CAN!” (Pharyngula – Freethought Blogs)

Hey, the idiocy in Gov. Jindal’s so-called “education reforms” has caught the attention of scientist/atheist activist blogger PZ Myers on his Pharyngula blog:

You’re doomed, all doomed. The state is about to privatize their “public” education system, turning it all into voucher-based chaos … and the Christians are looking forward to feasting on the shambles.

Here’s a segment from the news story that mentions the problems with the voucher system quoted by Myers’ blog (from Reuters via Balloon Juice):

At Eternity Christian Academy in Westlake, pastor-turned-principal Marie Carrier hopes to secure extra space to enroll 135 voucher students, though she now has room for just a few dozen. Her first- through eighth-grade students sit in cubicles for much of the day and move at their own pace through Christian workbooks, such as a beginning science text that explains “what God made” on each of the six days of creation. They are not exposed to the theory of evolution.

“We try to stay away from all those things that might confuse our children,” Carrier said.

But what’s the problem with set theory in mathematics?  Are the sexuality-negative religious conservative who publish Bible-based math textbooks concerned that Venn Diagrams will look like female breasts?

I’m sure Jindal’s so-called “reforms” will ensure that businesses who need educated employees will avoid our state.

Maybe we should look at the educational successes in other nations who report higher achievement in science and mathematics instead of throwing taxpayer dollars are unqualified Louisiana private schools? 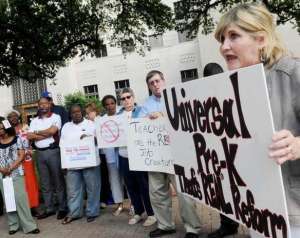 More press coverage of this week’s public action in the Shreveport Times:

Even though Gov. Bobby Jindal has signed sweeping education reforms, parents, teachers and community members say they will not be silenced from expressing their concerns.

The various Caddo Parish residents gathered in front of the Caddo Parish Courthouse on Wednesday after to protest “the privatizing of education” under the voucher and charter school bill approved this legislative session and to announce the formation of a new grass-roots education group tasked with starting a new conversation for real education reforms.

Tamica Harley, a parent with two elementary-aged boys in Caddo schools, said she has been part of an organization that has been challenging its members to think differently about their communities.

“We were asked to look around and see what the issues are that are having an effect on our communities, and in Caddo, the biggest thing now is education,” she said.

Harley said it is easy for the state and districts to expect schools to perform above par when there is 100 percent parent involvement, but there must be more done to address the children whose parents aren’t active in a child’s education.

“Punishing the teacher isn’t the answer nor is privatizing the public education system,” Harley said. “We must come together to fix the problems that ail our communities.”

To read the rest of this article, click here.

Well … I didn’t see this coming.

Even if vouchers could provide effective education reform for some students, what if the private schools rejected the voucher-funded students due to parental pressures?

A possible and maybe even likely outcome as one can see from these news stories:

Here’s some local news coverage of today’s public action in response to the education laws affecting our schools:

Protestors gathered in front of the Caddo Parish Courthouse this afternoon to voice their concerns.

The Louisiana Education Action and Reform Network, or “LEARN”, is behind the movement and they say they’re calling for a new conversation about public education.

The rest of the coverage including the video segment can be found here.